A downloadable game for Windows

If You download the game, be sure to read the disclaimer on the bottom of the page.

Enter the battlegrounds of two warring factions, as they clash for the eternal prosperity and domination over the ancient powers.

Pick Your character from 12 heroes, each offering completely different fighting experience. Having a choice from a quick fencer, agile knight, brutal warlord, a gunslinger, to the chain-wielding maniac or even a bizzare alien creature, You're ofered a wide variety of playstyles and ultimate attacks.

Say no to complicated combos and insane inputs. STARKHEIM TOURNAMENT depends on two buttons for attacks, and two more for additional actions. This makes the game easier for people who can't quite grasp the complexicity and high-skill entry point of the rest of fighting games. Now everyone can do perfect parries!

Warning!
STARKHEIM TOURNAMENT version You are about to download is in early access state.
This means the assets You're going to see have been limited to those that have been finished as of yet. The game is far from finished, and we're letting You check as much of this game as we can show the world, but be advised the progress is being made by 3 people - it can be slow sometimes ;)

Appearance and game elements might change in the future, and most probably will. Some of the functionality might mot work as well, yet. However, Your feedback is most appreciated, so make sure to let us know how You like the game so far!

STARKHEIM TOURNAMENT was designed for controller play, but can be played by two people on one keyboard. Controls might not have been yet explained in-game, so the list goes (Xbox controller as an example) :

Thank You for supporting our game :)

Just a quick criticism and a pressing issue for the game is the brokenness of the downed state. The opponent is invulnerable while they are downed so if they don't get up they'll win the round if they are ahead in life.

I suggest you add a penalty for staying down, like vulnerability, life loss, etc. 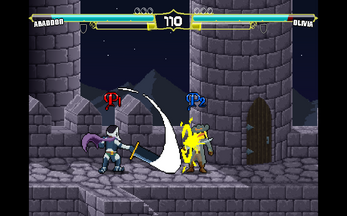 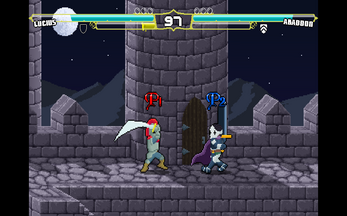